Shadows and Teeth - NOW OUT!

Shadows and Teeth, volume 1 of an anthology of terrifying tales of horror and suspense from Darkwater Syndicate, has been released and is crawling through the dark towards you. Buy it, before it reaches you...

The book contains ten dark tales by an international group of authors including a brand new story by J.S.Watts. The story is "Back Through the Mist" - a tale of bone-aching cold and freezing fog and things that are best kept hidden within the fog: What secrets might the mist be hiding where the divide between years has been rubbed thin?

The Dinner Party, by Trevor Boelter – A dinner party devolves into a massacre when the blood flows as freely as the wine.

Routine, by Mia Bravo – Edward's life is neat and orderly, just the way he likes it. It doesn't stay that way for long once bizarre apparitions threaten to end his life, and worse – break his daily routine.

The Final Spell, by Mark Meier – Ken, a modern-day wizard, risks life and liberty in pursuit of the ultimate magick. How far will he go to obtain limitless power?

Back Through The Mist, by J.S. Watts – Police Sergeant Comberton's investigation of a baffling murder strains her resolve to its breaking point. When the enquiry takes an otherworldly turn, she questions whether the past holds the key to her future.

Spawn, by Paige Reiring – Assassin-for-hire Alice's personality is so keen, it can kill. She'll need every edge she can get when the hunter becomes the hunted.

The Pied Piper's Appetite, by Rich Phelan – A competitive eater leads a ghastly double life in pursuit of a gruesome personal crusade.

Riana In The Gray Dusk, by Viktoria Faust – A hastily taken photograph leads to a shocking revelation and a rare glimpse at a singular individual.

The Autobiography Of An Unsuccessful Author, by Brittany Gonzalez – A one-hit-wonder's search for inspiration blurs the line between reality and insanity, with horrifying results.

Crying, by Darren Worrow – Vinny's research into an urban legend about a haunted painting reveals more about himself than he ever dared to ask. 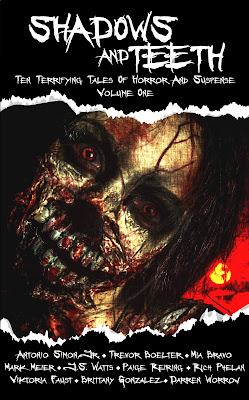