Strange Blog: or how I stopped worrying and learned to love blogging

Blogging hasn’t come naturally to me. This website may be hosted by Blogger, but it’s first and foremost a static website, rather than a chatty blog. My posts tend to be brief news items and updates, not opinion pieces or diary entries. Until 9th June 2011 I had never actually written a real blog post.

My first post, written for a writers’ online colony that I belong to, actually focussed on my blogging virginity and the losing of it. It was fun. I enjoyed writing it, but it didn’t exactly unleash a torrential flow of pent-up blogs.

It was a month until I managed another post. In fact, spurred on by an imminent trip to the 2011 Edinburgh Fringe Festival to read some of my poetry, I managed two posts in July and one in August. Then my usual blogging lethargy returned and I didn’t write another post until December.

Almost a year later and by the beginning of October 2012, I had written the grand total of just six blog posts. That’s less than one piece every two months. I clearly wasn’t at risk of writer’s cramp, or its modern equivalent, RSI, when it came to blogging. So what was the problem?

Obviously, it’s not that I don’t like writing. I’m a poet and author; it’s what I do. I love writing, but blogging somehow worried me. It seemed to require an opinion, something factual to comment on and I didn’t think I had that much to say that would interest readers in the Blogverse. Plus, with so many blogs already out there, why write even more?

I was happy writing book reviews for various literary and genre magazines. There were my poems, poetry books and short stories and a brand new novel. I wasn’t exactly short of things to write and publish. Blogging was a worry I didn’t need.

It was the novel that finally propelled me into the world of blogging: the novel and its publisher, Vagabondage Press. Thanks guys…

The winners of the 8th Annual Data Dump Awards for SF poems published in Britain in 2012 have been announced and the winner is.....

With many thanks to Steve Sneyd of Hilltop Press for running the awards for the last eight years. 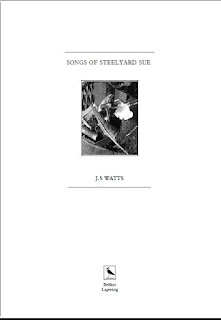 This month, author Jennifer Bogart is blogging on the subject of book covers and has asked all her guest bloggers to do the same.

Today, it's the turn of J.S.Watts, who has written about the impact of book covers on both reader and author. She also explores the thinking behind the striking cover of her novel, A Darker Moon.

Read what J.S. has to say here.

Steelyard Sue Makes It Through


With thanks to Pete Cardinal Cox, who's always in the know (you really should check out his poetry blogs), "Steelyard Sue Builds a Baby", from J.S.Watts' poetry pamphlet Songs of Steelyard Sue, has made it through to the short list for the Data Dump "Best SF Poem of the Year" Award.