Shadows of Light and Coffee

London Grip has kindly published a new poem by J.S.Watts in its New Poetry Autumn 2019 edition.

The poem is titled Shadows of Light and Coffee and is a reflection on Vivaldi’s Cello Concerto in A Minor RV 419.

You can read the poem, free of charge, by clicking on the title of the poem above. While you are about it, you should probably check out the entire edition, which also includes poems by Marisa Cappetta, Clare Crossman and Jacqueline Saphra (amongst many talented others). 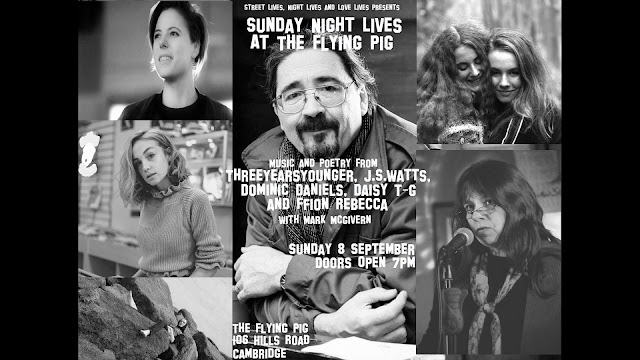 Sunday Night Lives at The Flying Pig is back yet again with an all new, unique line-up of music and poetry from Threeyearsyounger, J.S.Watts, Dominic Daniels, Daisy T-G and Ffion Rebecca (but maybe not in this order).

An evening not to be missed and its free (although donations will be gently solicited and gratefully received). It all takes place on Sunday, 8th September. Doors open at 7pm and because it's the Flying Pig there will be excellent beer and other beverages.

Vanguard Readings is a London-based reading series that has been running monthly since 2011 and has so far included more than 70 events. Vanguard on Tour started in 2016 and has so far made stops at Grasmere, Birmingham, Hay-on-Wye, Margate, Norwich, Leeds, Ludlow, Manchester, Salisbury, Brighton, Sheffield, Huddersfield, Workington, Bristol - and now Harlow. Its founder, Richard Skinner, is a poet, novelist and Director of the Fiction programme at the Faber Academy - and credited on the back of many best-selling books.

The Harlow event is taking place at the Harlow Playhouse and is curated and hosted by local writer Emma Vandore, and showcases six new writers and established authors, all reading for around 10 minutes each. As well as Richard and Emma, who will read from her novel-in-progress And, Breathe, you will hear from Harlow-born Jason Cowley, editor of the New Statesman, who will read a recent memoir-essay published in Granta called New Town Blues; award-winning local playwright Simon Mawdsley, who will read with an actor; Dunmow-based YA author John Tarrow who will read from his recently published novel The Stranger’s Guide to Talliston; and J.S. Watts, a poet and novelist based in East Anglia, who will read from her second novel Witchlight. 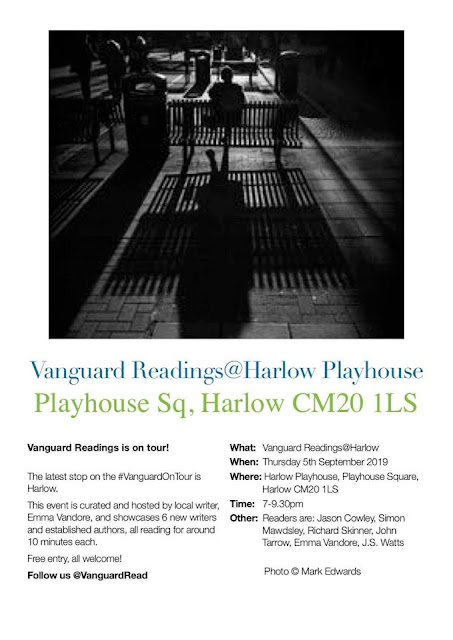 Another ghostly tale from J.S.Watts sees the light of day this month.

It's a little early for Halloween, but, in this blackly humorous story, Owen would be grateful if Halloween never came by at all.

Issue no. 5 of Survision Magazine has been published online. Based in Ireland, the biannual online magazine prides itself on publishing the most exciting Surrealist poetry of different trends and schools being written now.

J.S.Watts is honoured that she has a brand new poem, Buzz, in issue 5. You can read it for FREE here

We tell ourselves ghost stories after dark because it's scarier that way and because ghosts come out at night, but what if they don't?

A brand new, haunting, daylight tale from J.S.Watts is now available on the Dream of Shadows website. Click here to read for FREE